3D Printable Homes are Here, But not Economically Attractive – BDAA Skip to content
Previous Next

3D Printable Homes are Here, But not Economically Attractive

3D printing is a fact, they exist, and they are used for many commercial applications. Teams of electro-mechanical, engineers, materials engineers, civil engineers, and architects have been working in collaboration to build 3D printers for building homes.

Branch Technology is one such venture, and they have developed a system that prints a 1,000 square foot home. The only problem is that this home cost $300,000 to build. So, while the speed of building is optimized, the cost is much higher per foot of frame. This price is bi-polar to the requirements of fast, efficient and cheap housing.

Mind you; Branch is not the only company involved in this race for the cheap, and fast home. ICON, an American based venture developed a 3D printer that prints out a 350 square foot home in 48 hours at a cost for $10,000 when translated to 1,000 square feet, the price is a tenth of the Branch alternative. The printer that ICON used was called Vulcan, and at the time it printed those 350 square feet houses, it worked at only 25% capacity, this translates into a possible 600 to 800 square foot construction within 24 hours at the cost of only $4,000.

Now, this might seem great news for the billions of poor and homeless, but the prices are still too high to be viable, when taking into account local (third world) building costs. As such, there is still some work to be done to develop a viable 3D house printer, but the final product is very close, and ICON expects to come up with a solution soon.

Let’s take a quick look at one of their designs.

The 3D printer “Vulcan” prints out a complete shell in one piece. 3D printers are mobile, and the Vulcan weighs around about 2,000 pounds. The Vulcans designers considered weather conditions and included power and water shortage operability. The prototype design is comprehensive and includes a living room, one bedroom and bathroom, and small office space.

ICON staff tested the construct by using it as their office. ICON expects to deploy a viable version to El Salvador during 2019, after executing seismic and safety tests. ICON is considering an outer space version for printing abodes off-world. ICON claims that “It sounds crazy, but it would be a lot crazier to fly sheetrock and 2×4’s to Mars.” 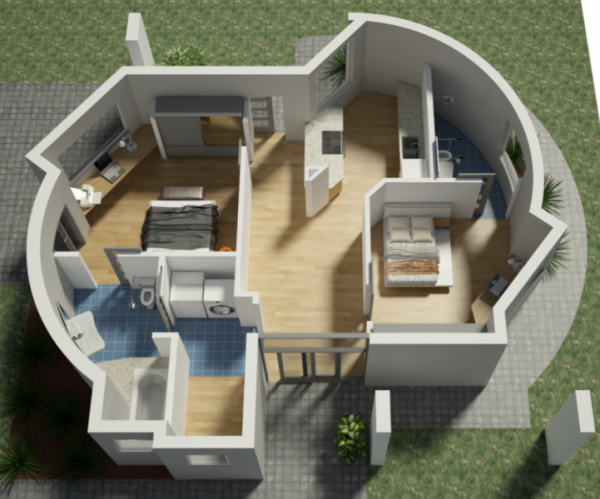