It is always comforting to see government lead public initiatives with displays of achievement rather than just promotion. This is the case with the City of Melbourne, which is Australia’s first city to build 6 Star Green Star design council house 12 years ago and is now set to build a new council house 1 site to replace the current old one.

There is a $232 million redevelopment proposal set for a council vote, and if approved, will allow the city to build a new 10 story, council house that includes ground-floor retail space, laneway connections, commercial office space, and public rooftops. Apart from this, the new council house will come with an underfloor carpark for electric vehicles only and a geothermal sustainable heating system.

The details of the plans include a plethora of solar panels integrated into multiple locations that would service retail, commercial and community spaces. There would be end-of-trip cycling facilities with ground-source heat exchange and waste management for all buildings. The rainwater tanks would come with urban design to capture and reuse storm-water, and the carpark would be reserved for EV’s only.

The old council house will be demolished, but the Victorian heritage-listed former Commonwealth Bank building on Bourke Street will remain to stand and be fully restored. The city council will vote on the plans next Monday, and if approved, the new redevelopment site will be located Bourke Street and Little Collins Street.

Although the new plans are applauded by most, there are a few stickers that more can be done, amongst them is a senior lecturer in sustainable architecture at The University of Melbourn, Dr. Dominque Hes. Dr. Hes claims that the building could go beyond 6 stars and be built with a Living Building Challenge standard. This is a very tough standard to build with since it demands that the building be capable of generating 105% of its own energy from sustainable sources, and the materials used in the building are totally toxic free including no CO2 emissions at all.

With this said, the CH2, was and is a success and is a standard to live up to, there are always more improvements, and a stepwise approach is much more beneficial than a total approach that can sometimes make or break a result due to the obstinacy of purpose. 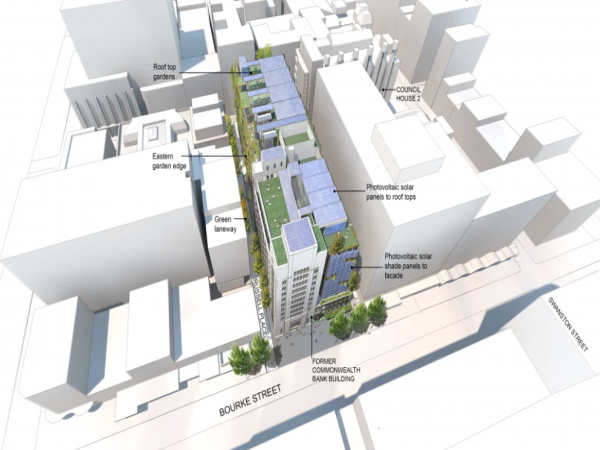