Construction sector bets on photovoltaic concrete as building material of the future.

Housing is a basic necessity for all of us, but relentless building activity is turning out to be the unmaking of Mother Earth. With every passing day, getting these buildings up and standing is literally proving to be a costly affair in environmental terms. The fallout of construction related industrial activity is turning an ecological nightmare. Thanks to the limestone and other components that are heated to very high temperatures for manufacturing it, every ton of cement that is produced contributes an equal amount of carbon di oxide to the environment. In fact, close to 10% of global emissions of carbon, are attributed to the concrete produced worldwide.

And it seems that moves are already afoot in that direction. Architizer reports that cement Swiss major Lafarge Holcim and the German solar panel manufacturer, Heliatek, showcased their photovoltaic concrete panels to the world, at Batimat, the prestigious French construction fair, in November 2017. Basically, made of concrete embedded with ultra-think solar panels, the photovoltaic concrete panels are the ‘ready for site use’ type. The makers claim that if 60% of a ten-floor building is covered with these panels, its annual energy requirements to the tune of 30% could be easily met.

In a parallel development, ETH Zurich University have also come up with their version of a photovoltaic concrete panel. Researchers here have created a super-thin, supple material by interspersing heating coils and solar cells layers within layers of cement concrete.

While it all sounds interesting, the technology talk is not going to be an easy walk. Just to get an idea, the photovoltaic solar-roof tiles that Tesla rolled out in 2016, definitely had a better look and feel than the conventional roof tiles that typically grace American dwellings. But more than two years later, there are very few of these actually installed. Fingers are being pointed at complications that arose during manufacture and also at Elon Musk’s objections on aesthetic grounds. Tesla is now looking to launch the wonder tiles sometime in 2019.

The experiences thus far, indicate that application of photovoltaic concrete in commercial construction operations will not be such a simple proposition after all. 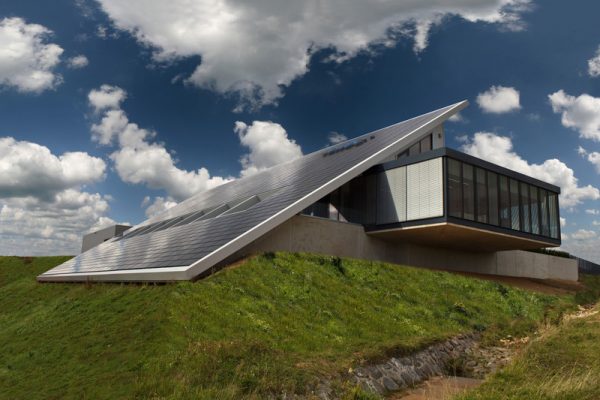