The landscape architecture field in Australia is making notable progress toward including and attracting women, a Census data analysis has shown.

In 2016 women are 47% of Australia’s landscape architecture force, which is almost half. The percent has risen by 5 from 2001. Also, women’s careers in this profession is as long as men’s, the study shows. This means that women don’t abandon their careers when they have children.

In contrast, the study shows that women tend to be less active in this field as they age. There is also a 10% pay gap between men and women who work full time.

On the other hand, Dr Gill Matthewson, the author of the study, says that “There is also no discernible gender pay gap at the junior end of the profession.” One of the explanation for this gap is the difference of ownership models men and women employ.

There is also a silver lining to be considered. The pay gap between men and women is lower than the one in architecture, which is 19 percent, and in the Australian industry (14.6 percent). The gap is particularly high as the career advances and the payment expectations are getting higher. Age brackets of 45 to 49-year-olds (29 percent), 50 to 54-year-olds (21 percent) and 55 to 59-year-olds (15 percent) experience the highest pay gap in the field. 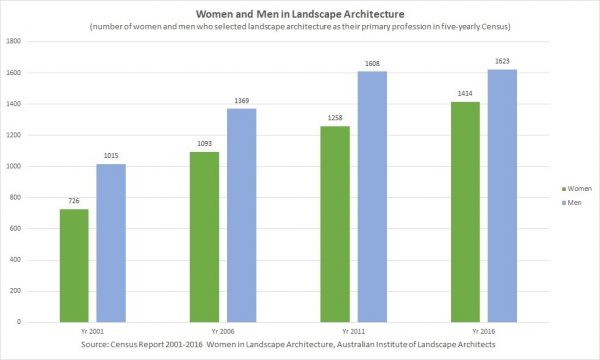 There are also other interesting findings about gender equality in landscape architecture shown by this study:

Study author Dr Gill Matthewson says the findings are welcome, because they show that a step towards equality has been made. “One of the key finds is that women are well-represented in raw numbers, and participation has grown over the course of the twenty-first century.”

Furthermore, the patterns women follow are important for creating an image for this field. “The Report also highlights how women’s patterns of work change significantly over the course of their careers. The most notable pattern is the high numbers of women moving into part-time work as they age, suggesting the profession supports a wide variety of engagement,” Matthewson said.

The study is part of a Gender Equity Project launched by AILA in order to investigate and understand the status of women in landscape architecture and develop strategies in order to reach gender equality.