The Dock Inn has been labelled as Germany’s first upcycled hostel, consisting of repurposed shipping containers that provide 64 guest rooms mixing urban chic with industrial charm. Surrounded by a local harbour and shipyard, the setting of the hostel could not be more relevant.

Located in Warnemünde, Germany, the designers felt that the edgy charm of the industrial location was the ideal place to pay homage to the structure’s former life at sea. The designers focused on creating a modern, contemporary hostel feel that incorporates a maritime element to honour the container’s seafaring history.

The 64 rooms contain 188 beds that mostly look out over the harbour. With rooms varying between private rooms and dormitory-style spaces with eight single beds, most rooms will feel compact with a modern feel. Natural light has been expertly organized to light up most of the common interior spaces.

Most of the space incorporates reclaimed materials. The building of this hostel follows a recent trend in the repurposing of cheap shipping containers. Many hostels around the world, including one on Brazil’s border to Argentina, have made use of the material to provide an alternative style of accommodation that will appeal to the travellers sense of modernity, sustainability and uniqueness. 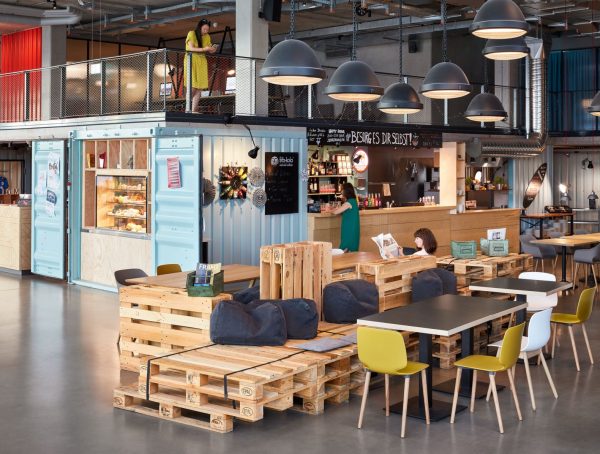