Master plans for Gurner’s amended Southbank tower have been approved.

As per the plan, serviced apartments on site will be supplanted by a build-to-rent structure as a component of a $350-million, 41-storey tower development.

A development ap pertaining to the Warren and Mahoney-designed gold teardrop tower was filed with the City of Melbourne in October for the 1625sq m site at 334 City Road.

The project stands as the second seed asset in the Gurner Qualitas build-to-rent platform—an additional two seed assets fall presently under the groups’ control in Melbourne, but remain bound by confidentiality agreements.

The Future Melbourne Committee unanimously approved the amended plan this week to make room for 396 build-to-rent apartments, a private gym lining the ground and first floor, and a fresh facade.

Gurner founder Tim Gurner revealed a focus on hospitality at the ground floor, middle levels and rooftop and a “world-class health and wellness precinct”.

The Southbank project at 334 City Road will unite top quality amenities, luxury interiors, facilities and service, permitting them to supply leading residential choices to folks at the pinnacle of the rental market, Gurner stated.

Gurner says the company is excited by the recent support and anticipate attaining planning approval in short order, so they can begin construction in the new year, with a completion date predicted 28 months later.

Gurner general manager of design Alexander Fin stated they wished to improve the design of the approved permit for the site they had attained, which had resulted in a design contest for the reimagined structure.

This should be a big improvement, with the site acquired with a permit given in 2016, Fin said. 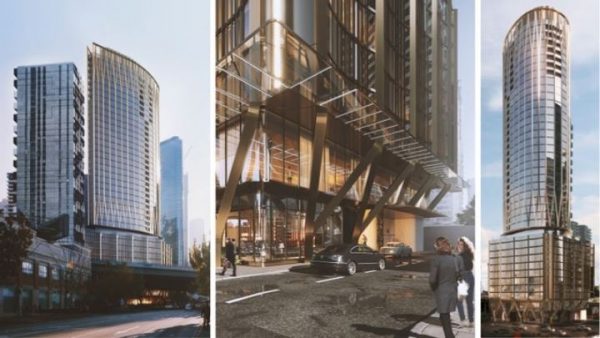 The vision for the project is to craft a world-class build-to-rent project, establishing a new benchmark for this asset class in Melbourne, Deans said.

They have enhanced [the 2016 permit] via a totally activated podium, lower street wall, top quality apartment layouts paired with a modern design response.

Deputy Lord Mayor Nicholas Reece stated the City of Melbourne council had rejected site plans twice before but the revised plan would make its Southbank mark.

“Gurner is a developer well-known for putting a premium on architecture and design, and when need be, being quite edgy with their design,” he said—adding it would contribute to the Southbank skyline.

He supports the new use and the inclusion of build-to-rent dwellings is something to be supported, as it supplies alternative housing for Melbourne residents.

Image credits by Warren and Mahoney