Felicity Bernstein, a Melbourne based Architect, has taken up a new venture to promote her vision for net-zero energy and fossil fuel free homes. Using the internet as a lucrative source for income, Bernstein went to crowd funding for smaller investors.

The vision of an airtight, low carbon healthy building is a growing trend, especially in Europe and the United States, while in Australia they are still struggling to rise.

Daniel Kress, a passive house expert, started a nine-day course to train people about the concept of an air tight home, since the interest in, and comprehension of the subject is weak at best.

What Bernstein and her partners are offering are sealed homes where pollen, spores, dust, and other pollutants cannot enter, maintaining a clean environment for the residents. Add to this, Bernstein wants a VOPC free environment, VOC is volatile organic compounds such as toluene and acetone found in many solvents and paints. She also wants to reduce embodied carbon emissions such as the carbon found in concrete.

Crowd funding is not so new, but is still, as yet not fully understood nor utilized. Crowd funding is when a privately owned website opens up a platform for inventors, and interested parties to present a concept, venture or charity for others to consider investing. The investments can be in the form of money for equity, money as a loan, or pure charity.

The Australian law prevented companies and ventures from raising equity-based investments to individuals with a net wealth of $2.5 million or had earned $250,000 a year for the previous two years. This has changed and opened the doors to companies and ventures such as Bernstein’s to everyday people that are seeking somewhere lucrative (they hope) to invest in.

Bernstein uses the Birchall platform to initially promote her venture and set investment levels starting from $50 to a maximum allowed of $10,000 per individual.

Based on her current performance online, with keen interested being shown from her PR work through the platform, Bernstein hopes to set a $350,000 to $500,000 total investment package.

At the moment Bernstein and her partners are concentrating on promoting their concept and building their prototype. She stated to the media that the current prototype “It’s a bit of a display home. We’ll use it as a case study home, which means it’s lived in.”

According to Bernstein, their goal is to build a “completely foil free” home, that eliminates the use of toxic chemical membranes by using only wood and board with cross-laminated timber, covered by a wood carbon insulation that uses natural resins.

Bernstein realizes that the probability of creating a 100% toxin-free home is hard, but getting up to 90% is highly possible. 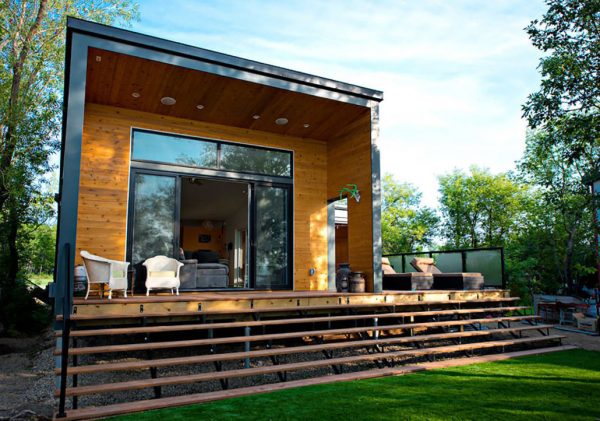