Landscape architecture has always been considered an elusive field when really, it has been around us all along for such a long time. It’s actually the fancy term that misleads everybody and makes it so inaccessible. So, what exactly is ‘landscape architecture’ and can a video game like Minecraft make it approachable to the masses?

Experts believe so. Landscaping basically entails carefully designing your built environment and public space with the help of planters, hardscaping, and other elements.

Deirdre Quarnstrom, the general manager of Microsoft’s Minecraft Education Program believes that the video game can actually be used as an educational tool of sorts. It has already proven to be a highly interactive community engagement tool in the contemporary world, so it’s the perfect way to make previously inaccessible subjects like Landscape Architecture more approachable to the general public.

Since Quarnstrom is also a director at a nonprofit organization called Block by Block (a partnership between Microsoft, Minecraft-creators Mojang Studios, and the United Nations), she is a firm believer in the communicative power of their initiative, which uses Minecraft to broaden community engagement around public spaces in the developing world.

The game was released back in 2009 for the first time, and since then, it has sold 150 million copies worldwide. This is a staggering number, making it the 3rd most selling game in history. Ever since its introduction to the general public, it has been acting as a “powerful building tool” to the public, according to Quarnstrom.

Joined by Lauren Schmitt and Pamela Galera (manager of Anaheim parks) at the ASLA 2018, Quarnstrom discussed the potential variants that Minecraft can use to invoke public interest in the field of Landscape Architecture. Already, the game allows the users to modify and explore the versatility of digital landscapes created from blocks. This indulgence helps people understand that basics of digital-to-reality implementations to a certain extent.

Quarnstrom believes that Minecraft can effectively tie the archipelago of public interest cohesively with its unique graphics. “Because it is blocky and not precise, it becomes a very accessible way for people to start building,” she says.

One of the major problems that Landscape architects face these days is translating their professional drawings for a layman. It can be difficult for a person outside the field to translate the two-dimensional mapping on papers into a three-dimensional view in their head. This is where Minecraft can help shift the perspective. By allowing people to actually participate in the design process through the game, they’ll naturally develop an inkling for understanding what they see on paper.

Another problem that is generally faced by people in the developing world, according to Quarnstrom is, that the planning processes are often dominated by men. Using Minecraft can help reach out to the excluded end of the demographic, including children, women, and elderly.

This is where the actual workshops held by Block by Block can come in handy. Everyone who’s participating in the game can actually contextualize their three-dimensional sites, then discuss and implement their various ideas during the meet-ups. At the end of the workshop, these Minecraft implemented ideas are presented by the participants, ranked, and handed off to professionals, who then convert them into applicable projects. By following this module, Block by Block has completed around 75 projects in 30 countries.

This is how Minecraft is being used to develop a whole new level of skill sets in ordinary people. So during at the Annual Minecraft convention called Minecon, Quarnstrom was struck by a whole new idea based on what they’d already been doing. The convention is usually attended by around 15,000 people and was slated to be held in Anaheim, California. Quranstrom’s brainchild involved utilizing the process they’d been using in their Block by Block program and introducing it in the city where the festival was being hosted.

The Anaheim parks manager, Pamela Galera was instantly on board because they’d already been the process of designing the Anaheim River Walk, and had worked out the urban opportunity to design a children’s playground. Galera said, “We wanted this playground to be cool…something very special.”

Their team had already participated in public outreach programs like craft sessions, etc. so they knew what the project might entail. Galera guided the neighborhood children into the Block by Block process. The base map of the site was projected into Minecraft, and the participant children were lectured briefly on the essentials of urban design to set a few constraints. Then they were divided in groups and allowed to develop their ideas within the game. The final model is now being designed/constructed in actuality.

Galera firmly believes her profession as a landscape architect to be just as people-oriented as it is nature-oriented. For her, participating in the Block by Block outreach with the help of local children was a great way to create exposure for an otherwise inaccessible profession.

The park will have a commemorative mural to celebrate the children’s involvement. Galera’s perception of Minecraft as a too for community engagement is definitely reflected by many others. 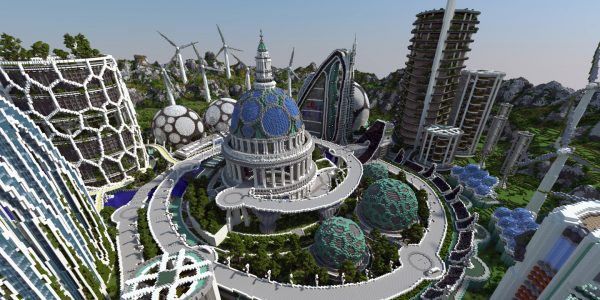