In recent years, there were a lot of discussions about how the new smart city concept actually change the city in which it was implemented. It turns out that this concept brings improvement to many areas, like smart transport, zero waste, clean water, better community engagement and many, many more. According to the most recent predictions by an expert, smart cities are going to become a $3.8 trillion market by 2024, which just goes on to show that smart city is not just a concept, but slowly becoming a reality.

The Australian government has started embracing the new concept with the roll out of its Smart Cities Plan, with 48 different projects getting $50 million in funding, with another $22.5 million on the way. This is the largest investment in helping Australian cities use new data solutions and technology.

While most of the mentioned projects are currently at their earliest phases, there is one that is in an advanced stage – Liverpool City Council partnered with Meshed (IT integration company) and University of Wollongong, to use internet of things sensors to measure pedestrian and vehicle movements. The idea is to use this data to improve transport, lower emissions and congestions and improve the safety of all participants in the transport.

Infrastructure NSW worked on a new smart city strategy last year and it is going to be the first state-wide strategy in Australia. In this strategy, both industry and experts had their say and it is going to cover every project from pilots to funding.

Things are moving faster at the local level, though, with five Australian cities in line for smart city leadership award, that should be announced during the Smart Cities Week. Among those five cities are Brisbane (using a large-scale Bluetooth monitoring system, first of its kind in Australia), Sunshine Coast Council (using sensors to monitor parking, pedestrians, wildlife and more) and Ipswich (has its own 100 square IoT network).

Communications sector is already working hard on bringing the latest tech to Australia. A great example is Telstra, which is currently preparing roll out of first 5G network. The new network will not only bring faster internet to all 5G-capable devices but will also support more devices to be connected at faster speeds. According to Telstra, their 5G Innovation Centre located in Southport is among the most advanced centres in the world and it is expected that it will enable smart cities to implement all kinds of new technologies – from augmented reality to driverless cars and drones.

With the transition of traditional to smart cities, many different areas are also seeing much-needed updates happening. Take transport as an example – thanks to the rise to popularity of Lime (known as LimeBike in the past), we are seeing a transport revolution happening. The demand for dockless bikes and electric scooters is growing rapidly, followed by the ride-sharing apps and drone deliveries. A few years ago we couldn’t even imagine having something delivered in 24 hours, while now we have drones doing deliveries, sometimes even on the same day. Lime is now developing a new type of transit pod because they are seeing the need for something different in the market.

Thanks to one of the main Uber rivals, Lyft, we are now moving away from the idea that we must own a car, because you can now how a monthly ride share subscription – just like you now have Netflix subscription instead of DVDs.

We are obviously moving to a data-driven future full of technology, but what does that mean for sustainability? It seems that whatever is the sustainability goal of every city – whether it is zero emissions or clear water, those cities need to embrace new technologies and data. A few years ago this wouldn’t be possible, but now with all the investments in technology that fuel development, smart cities will be able to gather all the data they need and later use that same data to fulfill their sustainability goals. 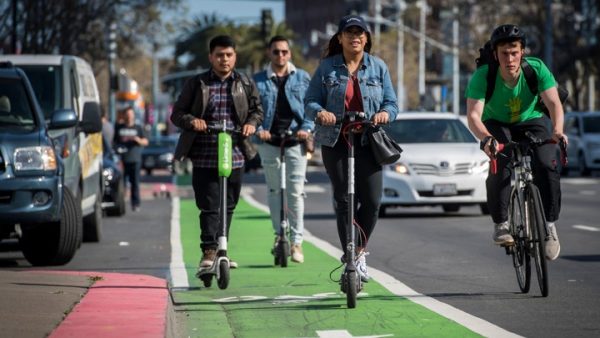