The fight with climate change has taken a new turn four years ago, when a bold idea was put to test: replacing the tarmac on the roads with solar panels. Unfortunately, the preliminary results of the test are not as extraordinary as one might expect.

The advantages of clean energy are clear. But installing solar panels on the roads has many disadvantages, some that are very costly. If they are not installed at an optimum angle and they are covered with shade on just 5% of the surface, the power generation is reduced by half.

Also, dust and dirt must be taken into consideration, as they will coat the panels, regardless of the weather. And the glass that covers them should be considerably thicker, to sustain traffic, which limits the light absorption.

Another problem is the heating. For every 1°C over the optimum temperature, the panel loses 0.5% of efficiency. The roads get more heat than a house rooftop because of traffic and lack of air circulation.

As you can see, the solar road is less efficient than installing rooftop solar panels. But let’s look at the economic part and see if the road panels are a good investment.

Are road solar panels the future?

Tourouvre-au-Perche in France was the first solar road. The cost of installing 2,800 m² of solar panels was of €5m. The road was supposed to generate 800 kilowatt hours per day but they only generate 409 kWh/day. This means that the panels’ efficiency is cut in half, and the technology’s efficiency is only 4%.

As a reference, you should know that the Cestas solar plant in Bordeaux, France has a maximum power output of 300,000 kW and a capacity factor of 14%. This plant generates three more times power for a fraction of the price of the solar road.

In Sandypoint, USA, Solar Roadways developed a smart highway, with solar panels, LED lights to display traffic warnings and heating pads to melt snow in winter. The cost per installed KW was of €27,500, 20 times higher than the Cestas power plant. The 13.9 m² installed area has a capacity of 1.529 KW.

Even though the idea is great, the results were not overwhelming. The Sandypoint road generated only 52.397kWh in 6 months, 20 times less than the Cestas power plant. One of the reasons for the low efficiency is the additional consumers: the heating plates and the LEDs which also consume energy.

Another reason for the low performance is the fact that this is actually a town square, so the light is obstructed by the buildings. Building solar panels in places where they won’t get enough lighting it’s not the best idea.

Nevertheless, building solar roads is not a great idea. They are expensive and difficult to maintain clean and they are not as efficient as one might think.

There are not enough roads

One might assume that roads occupy a large surface of a country. But they are wrong. For example, the UK department of transport claims that the United Kingdom has only 2 billion m². In contrast, the urban areas occupy 17.6 billion m².

Coating the roads with solar panels is less efficient than covering rooftops with them. Aside from the costly maintenance and the underperformance, rooftops have the advantage of being elevated, and thus receiving more light.

Aside from looking futuristic, the solar roads are not the answer for creating a reliable and durable supplier clean energy. It can only be a small and expensive source of power. 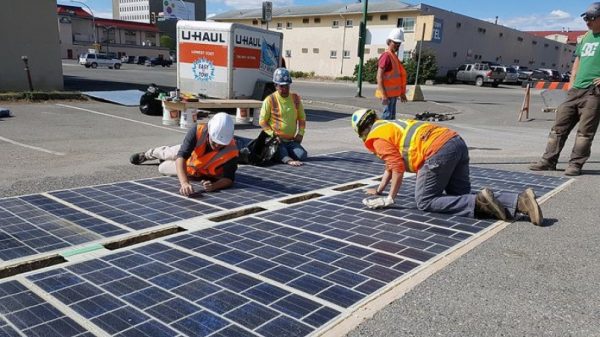