Findings from the most recent study about illnesses caused by mould and moisture in buildings have been released by the federal government. Experts from biology, health, and building physics have presented evidence in August and September before the committee. The focus was on Chronic Inflammatory Response Syndrome (CIRS) and many different associated symptoms that are very hard to diagnose and treat. Some of those symptoms include weight gain, fatigue, numbness, tingling and “brain fog”.

Experts also investigated the link between mould in buildings and CIRS, and how the building standards should improve concerning moisture.

At the moment, there is a non-mandatory guide for condensation in buildings created by the Australian Building Codes Board (ABCB), but it is not part of the National Construction Code (NCC). That is why all the experts at the hearings agreed that there is a need for standards related to the prevention and lowering of dampness and mould in buildings to be mandatory.

Dr Tim Law, the architectural scientist, claims that Australia’s standards are years behind best practices in use globally and pointed out that Canada and Ireland are leaders in this area, while US, UK, and New Zealand are also in front of Australia.

President of AIRAH’s Building Physics Special Technical Group (STG) and a building scientist at Pro Clima Australia, Jesse Clarke, said that it is better to prevent condensation problems than to cure them later. Furthermore, he claims that the prevention of moisture and mould should include the good design of the building envelope, taking in account properties of materials used, looking into moisture storage and choosing the right HVAC system to work with the design and the materials.

During the inquiry, experts have presented building practices that they believe increase dampness and/or mould levels:

Another relevant factor presented during the inquiry is occupant behaviour. People who keep windows closed at all times and flood sinks or baths increase the moisture level in the building. While there are reasons for people not to open windows (because they are absent or at work), Clarke believes that this could be avoided with good design.

According to Clarke, building code states that openable part of windows must be at least 5% of the floor area. However, it assumes that people will be at home to open windows. The problem is that some people won’t open windows even if they are home, because they are afraid for their security or just to keep rain or noise away. This is the main reason why a continuous ventilation system is a solution in EU and US regulations.

In recent years the main focus in construction was the creation of both fireproof and energy-efficient homes, which has as a consequence increased condensation, which further leads to moisture and mould.

Clarke claims this is the truth and that the use of vapour-impermeable materials is not in accordance with good building envelope design nor with the rules of hygrothermics. Furthermore, he claims that aluminium foil membranes shouldn’t be used in most of the buildings to make sure that the use of those buildings are healthy for its occupants.

He stated that the key to improving the energy efficiency without unintended consequences is to first understand building products moisture sorption and vapour transfer properties and the correlation between moisture accumulation and thermal transfer. 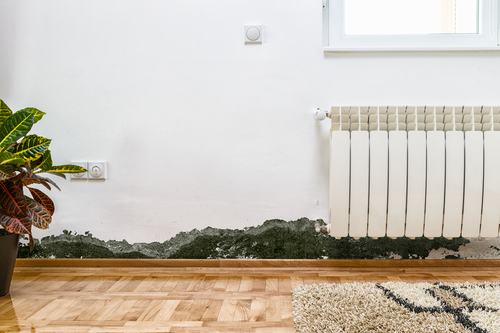