Meta: The Water Abundance XPrize winner is a device that literally pulls out water for a 100 people out of thin air, and works at an affordable price!

Water shortage is a serious problem that is threatening the contemporary world nowadays. The water crisis in Cape Town was a major red flag. The city literally ran out of water, and the news seems to be the harbinger of terrible foresight on our part. However, experts are working round the clock to avert this quandry, and a new device that can pull drinking water from thin air has been awarded the latest XPrize!

Powered by clean energy and sitting inside a shipping container, this device can summon drinking water everywhere! The vast applications of this contraption can help thwart the looming water crisis imminently. Designed by the Skysource/Skywater Alliance, this innovative project has received a $1.5million in the ‘Water Abundance’ category of the XPrize.

So, how does it work?

It literally pulls water from the air.

The competition challenged all the participants to invent a device which could extract at least 2000 liters of water directly from the atmosphere by using clean energy. This is the approximate amount that can sustain around a 100 people. In addition, the rough cost of this water was to be less than, or equal to 2¢ per liter.

The implementation of this simple concept can go a long way in completely changing the face of this world. From major crisis in disaster zones and refugee camps, to rural villages in the desert, clean drinking water can be available to anyone, everywhere!

XPrize has always cultivated their way to the heart of every problem. Representative Zenia Tata says that, “…we do a lot of first principles thinking at the XPrize when we start designing these challenges.”

The base team had already realized that the atmosphere was an untapped source – nature’s own reservoir of sorts. “At any given time, it holds 12 quadrillion gallons – the number 12 with 19 zeros after it – a very, very, big number,” Zenia continued. While using artificial methods of water purification like desalination are extremely expensive, creating freshwater from the atmosphere itself seemed like a good place to start. This realization was what spurred Zenia and her team to present this challenge.

While a few air-to-water devices already existed, they were incredibly costly for large-scale use. This helped define the parameters of the challenge.

The winning device is called the WEDEW (acronym for; wood-to-energy deployed water). It basically consists of two intricately combined systems. The first one is called Skywater. It comprises of a large box that imitates cloud formation by taking in warm air, hitting it with cold air, and forming condensation. This condensation delivers drinking water, which is stored in a tank inside a container. It’s biomimicry at its best – humanity mimicking nature’s genius.

However, the designers did face an enormous challenge in the creation of this device. The first system used a lot of electricity, which was highly unfeasible. This led to the creation of the second system: a biomass gasifier. This is a low-cost, highly renewable energy source that is powered by locally available biomass like wood chips, coconut shells, etc. The heat generated from evaporating all this biomass creates the ideal temperature to run the Skywater machine. The excrement of this machine is a biochar that can be used as fertilizer for the soil.

This is extremely cognizant of eco-systems all around the world, and makes this device universally applicable. For example, dead forest trees can be used to power the biomass gasifier in areas where forests are abundant. But in places where there are not any trees, something else be used just as easily.

The winning team incurred the help of a California based architect called David Hertz on this project. Hertz has dubbed this device, “…a carbon-negative technology.” He also believes that going back to our roots and using a regenerative model in future technologies is the only way we can reverse the damage we’ve caused to our environment. “…imagine these shipping containers being positioned in a state of readiness throughout the world to be able to respond to disasters for both energy and water,” Hertz finishes.

The team plans to use the prize money to develop and situate the WEDEW device worldwide with nonprofits! 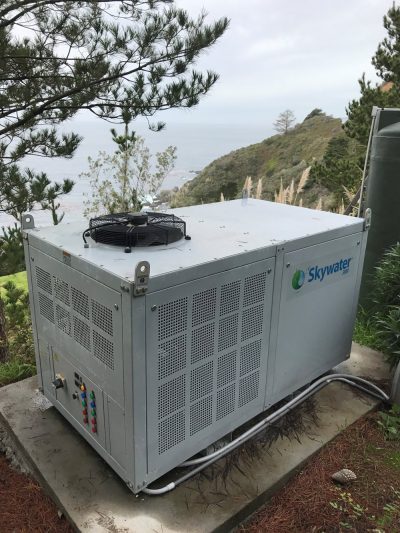