Will Perth Embrace the “Second Rail Revolution”? – BDAA Skip to content
Previous Next

Perth, just like most Australian cities is facing a problem with congested streets. Not only does this city is rapidly growing (experts predict that Perth is going to have 3.5 million citizens by 2050), but it also has one of the highest car use rates seen in Australia. Average commuter now travels by car 10 km/h slower than five years ago. The time has come for the capital of Western Australia to think about improving public transport, with Professor Peter Newman from Curtin University claiming that trackless trams could help with solving the problem.

On the other hand, McGowan government in Western Australia still believes in the usual solutions for this problem – they have invested $2.7 billion in roadworks this year, with primary focus on adding more lanes to freeways, even though it is believed that by doing this the demand is increased, which just creates more congestion.

The 2017-18 federal budget announced that WA will get $2.3 billion road and rail package and of that package $49 million went to widen Kwinana Freeway northbound, $50 million for a new interchange on Wanneroo road, $40 million to widen Mitchell Freeway southbound and $237 million was invested into building a bridge over the Kwinana Freeway. These projects offer only temporary solutions for transport problems and employment (they are expected to create a total of 500 jobs), but the current congestion problem will not be solved.

The state of public transport in Perth

Transperth, a public transport body, has recently published a report that has shown that the overall use of public transport in Perth has fallen for a fifth consecutive year. Currently, taxpayer subsidies to support public transport are around $1 billion. While there are many reasons for this, according to Perth residents claim that the high ticket price is to blame.

At the moment, commuter trains are the most popular form of public transport with Mandurah line carrying more than 20 million passengers a year and the Joondalup line a little less – 17 million passengers a year. However, these trains are overcrowded, with reports claiming that they are full 24/7. On the other hand, public buses run at loss, mostly due to rising costs of tickets.

McGowan government main solution for public transport is their light-rail project Metronet. The current state of this project is laying 72 kilometres of new rail, which costs $4.75 billion. The government believes that this project will not only solve public transport problem, but it will also enable train stations to become hubs for residential and commercial development.

Solving the transport problem in Perth involves much more than improving rail infrastructure. One of the biggest problems now is the crosstown traffic that somehow needs to be moved. Trams are slow and restrict the rapid flow of traffic, with buses just adding to congestion. Light rail that was proposed as a solution is not only costly, but it also requires platforms, running gear and elevated lines.

One of the professors from Curtin University Sustainability Policy Institute (CUSP), Peter Newman, has traveled to China to investigate a radical solution.

The many advantages of trackless trams

The trackless tram that professor Newman was interested in was developed by CRRC Corporation. The newly designed tram runs on sensors, it is as flexible as a bus, it has all the best features of heavy rail while being 50 per cent lighter. Furthermore, it costs between $6-8 million per kilometre, while the new light rail system installed in Sydney costs $120 million per kilometre and the Newcastle Light Rail is even more expensive – $127 million per kilometre.

Newman believes that these new trackless trams are better than buses or traditional trams. He believes that this innovation will transform Australian cities. Professor Newman is known to believe in potential that trams have – in 1979 he started a campaign to save a tramline in Perth. His idea is that the fixed nature of a train is more important than the use of flexible buses.

The latest data shows that Perth is very dependent on car transport, claims professor Newman, while most of the bigger European cities have fixed transport systems. Furthermore, he mentioned that Asian cities don’t have big car use and that the cities in Asia are doing much better ecologically than Australia or US. The interesting information he shared is that most cities have shown steady growth in public transport use and at the same time decline in car use, while in Perth it is other way around.

The different concept of trackless trams

The most interesting thing about trackless trams is that they do not fit in existing developments, instead, they rely on value capture. This means that instead of the government investing into transport, the developers themselves are investing in transit infrastructure, trams and the urban landscape surrounding the tram lines.

Professor Newman has praised the new concept that these trackless trams are based on. He said that the idea of value capture is having the private investors funding construction and development around the transport nodes, which raises the value of the land. Newman even went on to claim that this is the “second rail revolution”, which should lead to Perth being a less car-dependent city.

We’ve seen in the past how developing a public transport network can help with the development – in the 19th and 20th century, Perth Electric Tramways covered Perth with tram tracks, helping to increase development in the whole city. One of the best examples is the Newman points to Nedlands park development, which ran through an entire suburb, which helped sell suburban lots, build hotels and shopping spots.

According to professor Newman, in recent times the transport and land use are not integrated. He said that a good example of how the private sector can help with development is the telecommunication sector and that the same idea should be implemented to transport. Instead of making the government the only investor and the only operator, public transport should be opened to the private sector, which in turn should get Perth new projects with support from both the community and local governments.

There are many reasons why professor Newman strongly believes that the trackless tram developed by the Chinese company would be great for Perth – the current generation of trams is electric, with batteries located on the roof, they can go up to 70 km/h and can take up to 500 people. This means that the trams are not only cheap, but they are very efficient and have zero emissions.

Trackless trams can be installed over the weekend, while conventional rail takes up to 5 years to install. Furthermore, the trams run on sensors that are built into the road surface, which means that they are autonomous, practically driverless. However, every tram has a driver that is there just to make sure that everything is working, pointed out professor Newman.

Professor had the opportunity to see firsthand how the new generation of trackless trams work in use – when he visited the city of Zhuzov in the Hunon province. He was satisfied with the ride quality, noting that there is no sway. Furthermore, he noticed that they have double axles like a train, hydraulics and stabilisers from high speed rail and special tyres. Furthermore, he noted that it is a fixed system because you have to charge it at a station, but flexible because it can avoid any accident in front of it by going off the road.

All major Australian cities could benefit from trackless trams

Newman believes that every Australian city is already ready for trackless trams – they can go on a road with up to 13% gradient, they have a good turning circle, they can use existing control centres and when finished with transport, they can use bus depots to park.

The manufacturer, CRRC Company has more than 18.000 employees and even though it is state-based industry, it is a profitable company with many subsidiaries in other, closely-related industries. Talking about the tram production, Newman said that they are currently in their third generation, with the fourth generation just around the corner. The newest trams will be even more autonomous than the ones currently in production. At the moment, CRRC Company produces between 8 and 10 trams a month, but they are already building more factories and expect to bring production up to 30 units a month.

Curtin University Sustainability Policy Institute (CUSP) and the Sustainable Environment National Research Centre already published a guide and a manual for the trackless trams. Newman said that they have created an entrepreneur rail model, which the main idea is to connect finance and transit land development. This is completely different than the traditional way – where you would first predict the number of people that might use the line, then get funding from the government and in the end think about possible land development. In this case, professor Newman said that their approach is to first see how many potential has the land development on a possible tram line, get funding from that and then design everything related to transport.

Professor said that they already have a place in the plan for major centres in Perth and that they have found a few sites that would benefit from development caused by the implementation of the trackless tram system. He believes that there is no reason to move the trackless tram away from a route that already has a developer committed.

Furthermore, Newman stated that officials from many different parts of the city are already interested in trackless tram systems, but there still are a lot of opportunities to dramatically decrease the use of cars as a main form of transport in Perth. 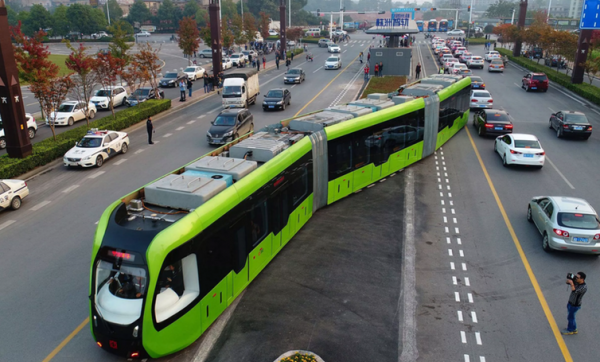